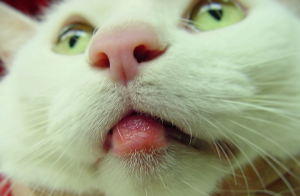 This (otherwise known as EGC) is a long name for an inflammatory reaction to an allergic process in the form of an ulcer, plaque or granuloma.  Indolent ulcers appear as erosions of the lip or tongue. Plaques look like raised thickened raw areas of skin. Granulomas are swollen tissue that may appear ulcerated. In all these processes eosinophils are present which are a type of white cell that are associated with allergic responses or parasites.  They are immobilized as part of an immune response to an assault such as fleas or worms.  Usually they release biochemicals to destroy the assault but in the case of EGC they essentially dysfunction and destroy local collagen leading to the above changes.

Diagnosis is often based on classic appearance of the ulcers, plaques or granulomas however biopsy may be indicated to rule out other causes such as cancer, parasites or other forms of ulceration.  This is usually performed under heavy sedation or general anaesthetic.

In most cases, the eosinophilic granuloma responds to immune-suppressive drugs the first choice of which is usually cortisone (prednislone). This can be given in the form of long-acting injections or orally. Duration of treatment varies from a few weeks to life long based on the symptoms present and their response to treatment.

All cats with EGC must be on strict flea prevention products. There are many on the market that are excellent so discuss the best choice with your vet.

Based on the symptoms other treatments may also be considered including: