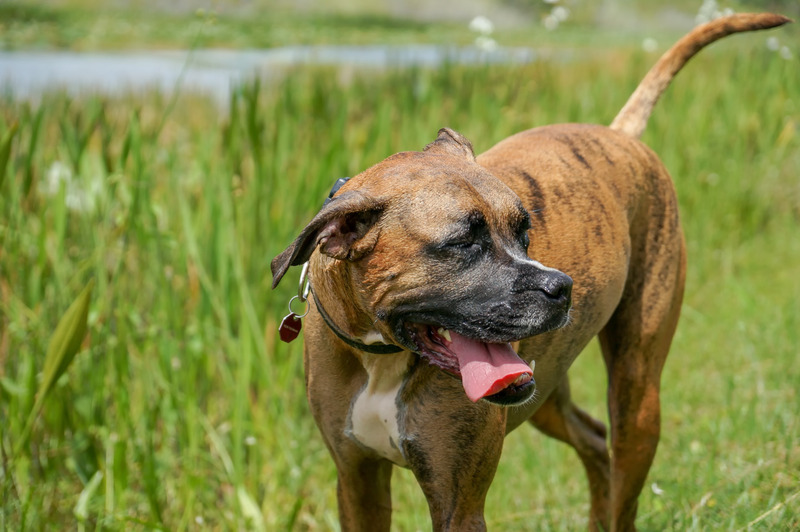 Mast cells are a type of white inflammatory cell that are mobilised when parasitic organisms invade.  Occasionally these mutate into tumours which are notoriously invasive and difficult to treat.  Mast cell tumours can arise anywhere in the body but generally will be seen on the skin. The lumps vary in appearance but often owners will notice a sudden change in size, texture or the lump becomes bothersome to the patient.

Mast cell tumours are common in dogs and account for approximately 1 in 5 skin tumours with certain breeds more likely to be at risk mainly Boxers, English Bulldogs and Boston Terriers.

To diagnose a mast cell the vet will take an aspirate of the lump (usually this can be achieved conscious but sometimes sedation is required).  They will then examine the cells under the microscope to look for the classic darkly stained mast cells.  Often this aspirate diagnosis will be confirmed by a pathologist and then the next step is removal of the mast cell to grade the tumour and determine prognosis.  This involves a general anaesthetic during which the surgeon removes the lump with very large margins to ensure as much tumour as possible is removed. This usually means the resulting wound is much bigger than you expect.  Generally, this is a day surgery and a relatively smooth and low risk procedure.  If the lump is in a position it is difficult to remove in it’s entirety, a biopsy will be taken instead.

The lump or biopsy of the lump is then sent to a laboratory where a pathologist confirms the diagnosis of mast cell tumour and applies a grade to it based on the Patnaik system. This system is simply a reflection of the malignant characteristics of the cells under the microscope (which generally correlates to the behaviour of the tumour) with Grade I being benign, Grade II being borderline and Grade III being malignant.

This is the best type of mast cell tumour to have. These low grade tumours do not tend to spread beyond their location and thus removal is considered curative presuming the margins of the sample are clear of tumour cells. Occasionally a second surgery is required to ensure these margins are large enough to prevent regrowth of the tumour. About half of all mast cell tumours are Grade 1 tumours.

Grade II tumours are unpredictable in their ability to spread or regrow.  In some cases local removal with good margins is adequate treatment however in other cases they will regrow or metastasize to other areas. Depending on your pet’s age, breed and the location of the tumour your vet may recommend referral to a veterinary oncologist for further treatment. Radiation therapy is considered for Grade II tumours.

Grade III tumours account for approximately 25% of all mast cell tumours and they behave very invasively and aggressively. If only surgical excision is attempted without supplementary treatment, a mean survival time of 18 weeks (4-5 months) can be expected.

Mast cell tumours arising in the nail bed, genital areas, muzzle or oral cavity tend to be the most malignant. Mast cell tumours that originate in deeper tissues such as the liver or spleen carry a particularly grave prognosis.

For all patients with a Grade III tumour a staging process will be recommended following diagnosis. This will determine the prognosis and plan. The tumour is staged 0 through IV as described below:

To determine this stage your vet will likely recommend a few diagnostic tests such as blood work, bone marrow sampling, lymph node sampling or imaging of the chest or abdomen (x-rays and/or ultrasound).

As mentioned above the first step is surgery to hopefully remove the tumour or at least biopsy it. As mast cell tumours are quite invasive a wide margin around the lump is needed which can be a problem in certain areas such as the oral cavity or a toe or leg. Post-operative complications may include swelling, bleeding or wound breakdown.  Your vet will likely perform this surgery unless the lump is in a difficult position in which case referral to a specialist surgeon may be recommended.

If the margins are narrow or margins indicate there is still tumour left behind then a second surgery or even a course of radiation therapy may be recommended. Clean margins are generally defined as a 10 mm margin around the tumour in all directions. When clean margins are established the tumour is very unlikely to regrow in this area but it should still be monitored. It’s important to note if the “wait and see” approach is taken that the reoccurring tumour is likely to be more invasive, deeper and potentially ulcerative.

Radiation therapy is performed by specialists and is sometimes recommended when Grade I tumours cannot be removed in their entirety or for Grade II tumours.  Radiation is less useful when the tumours have already spread to other areas of the body but is occasionally indicated for Grade III tumours.

Chemotherapy is an option for those patients with Grade III tumours and your vet could refer you to a veterinary medical specialists or oncologist for this treatment.  Current options include  corticosteroids (such as prednisone,) Lomustine, Carboplatin and Vinblastine.  Sometimes basic chemotherapy protocols are performed in a general vet hospital.

More recently the use of Toceranib, an oral chemotherapy agent has shown promising results with Grade II and Grade III mast cell tumours.

The skin form of the feline mast cell tumour classically arises around the head and neck. There may be one or many lumps and surgical removal is usually indicated. Occasionally radiation therapy is also indicated in more severe cases.

Internal mast cells commonly involve the spleen, liver, and/or intestine. Vomiting, appetite loss, and weight loss are the most common symptoms. As with the cutaneous form surgery is the treatment of choice if the area affected can be removed however staging as per a dog mast cell tumour is now achievable due to the differing nature of these tumours.

Luckily, the spleen can be removed leading to a rapid recovery. The median survival after splenectomy is 14 months (vs. 4-6 months if the spleen is left). This is not to say that the cat is cured with splenectomy, but removing the spleen frees the cat from the bulk of the mast cells quickly and it takes time for the tumour to regrow.

Not all veterinarians are comfortable treating mast cell malignancy. Discuss with your veterinarian whether referral to a specialist would be best for you and your pet.