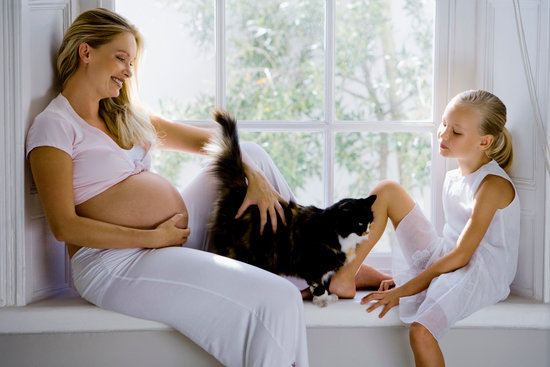 Toxoplasmosis is the disease syndrome caused by a protozoan organism called Toxoplasma gondii. It affects most animals – most notably sheep, cats, and humans – but even insects, fish, and earthworms may be carriers. We frequently get asked whether pregnant women should not keep their cats as a result of the risk of this organism transferring from cat to unborn child.

What is the risk to an unborn child?

If the person infected is a pregnant woman, the Toxoplasma organism may cross the placenta. Infection in early pregnancy may result in miscarriage, stillbirth or varying degrees of blindness and/or various severe neurological conditions including hydrocephalus, microcephaly, and retardation. Sometimes problems are not evident at birth and show up late in life.  Fortunately, only 30 to 40% of infections in pregnant women result in damage to the foetus, the most common problem being eye disease.

Transmission via the placenta will only occur in a woman infected for the first time.  In many instances woman have been previously exposed to Toxoplasma and thus cannot infect their unborn child. A blood test is available to determine your previous exposure to Toxoplasma.

How do people get this disease?

There are two basic forms of Toxoplasma organism: the oocyst, which is shed in cat feces, and the Toxoplasma tissue stages, which live in the flesh of such food animals as pigs and lambs. A person who inadvertently eats either of these forms of Toxoplasma is liable to become infected. Raw goat’s milk is also an important source of infection.

If my cat has Toxoplasma, won’t they be obviously sick?

Not necessarily. The form of feline infection that is contagious to humans is the intestinal form in which a cat sheds oocysts in its feces. The cat may or may not experience diarrhoea.

Cats may experience an acute illness similar to that which humans experience; however, in adult cats, symptoms are usually mild and go unnoticed. This form of infection is not contagious to humans, though a pregnant cat could transmit the disease to her kittens.

How is my cat a risk to me?

In short they are a very low risk of transmitting Toxoplasma.  You are much more likely to get a Toxoplasma infection from eating tissue in undercooked meat.

Usually a cat will only shed oocysts after the first infection of Toxoplasma; a cat that has already had a Toxoplasma infection usually will not re-shed the oocysts unless its immune system has been compromised (as through the feline leukemia virus infection or drugs.) Cats shedding oocysts generally do so for 5 to 14 days.

Oocysts require 24 to 48 hours to grow into a form that is dangerous to people. For this reason, the cat’s litter box should be changed daily or twice daily. Dangerous oocysts can be contacted when gardening. Note that freezing weather will not reliably kill dangerous oocysts in soil nor will freezing meat kill the dangerous tissue forms.

Your cat may be tested to see if she has already had Toxoplasmosis; a cat that has already been infected is unlikely to shed dangerous oocysts in the future.

The cat itself is not a source of oocyts: only its faeces are.

How can I avoid infection?

Although it is possible to get Toxoplasmosis from cats, no correlation has been found between cat ownership and Toxoplasma infection. There is, however, a strong association between Toxoplasma infection and working with raw meat as in a slaughterhouse or as a butcher.